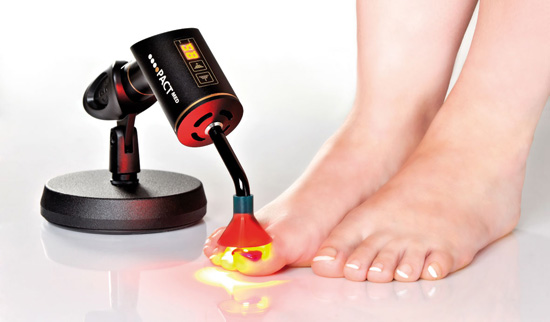 Blue dye (Toulidine Blue) was specially developed for application to toenails and fingernails and it only works in combination with exposure to light from a PACT® MED light device. PACT®  nail fungus treatment can only be performed with the LED lamp PACT® MED and other light sources, especially red light, must not be used with blue dye because other light sources do not normally bring about any fungus reduction.

The symptoms of nail fungus infection are characteristic and visual diagnosis is usually sufficient. In cases of doubt, scrapings are taken from the nail affected and examined directly under a microscope. That makes the fungus visible and a diagnosis can be made immediately. For exact identification of the species of fungus it is necessary to make a culture. Not every nail change is a case of onychomycosis. There are numerous causes, e.g. psoriasis or infections that may have similar symptoms. Nail psoriasis and nail fungus in particular are easily mistaken because both diseases can typically have yellow, brown or grey nail discolourations. If the infection is severe or the diagnosis is not definite, please make sure you contact a doctor before using PACT®. He or she can conduct a microscopic or microbiological examination. 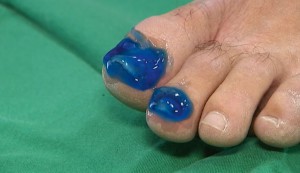 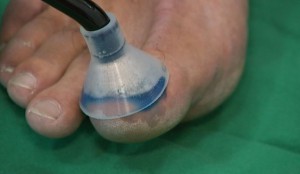 Due to a special dye (photosensitiser) microorganisms become sensitive to light at a certain wavelength and die off within a short space of time. With a light treatment time of a few minutes it is also possible to combat nail fungus. The more severe the infection, the more frequently treatment can and should be performed. During light treatment the nail should always be covered with gel. Blue dye is toluidine blue, a special non-toxic dye (phenothiazine). It is selectively stimulated with light at a wavelength of 630 nm so it kills off fungi by forming singlet oxygen, without harming the skin. Stimulation is performed using the specially developed PACT® MED device, because light intensity, wavelength and light treatment time must be exactly matched to the dye gel in order to be effective. 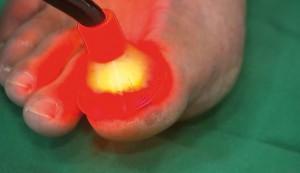 Fungi are less sensitive than bacteria so the reduction of fungus in highly inaccessible nail keratin makes treatment difficult. That is why photodynamic antimicrobial therapy is a good way of combating the infection with a single treatment or one week of treatment.

Apply blue dye to the affected nail generously. The gel must cover the entire nail and be allowed to act for approx. 10 minutes. Rub well into the tip of the nail, and especially under the nail. Also rub under the nail fold and nail wall. Then treat with light using the PACT® MED for 9.5 minutes at a distance of approx. 2.5 cm. If necessary, repeat light treatment without applying any more gel. 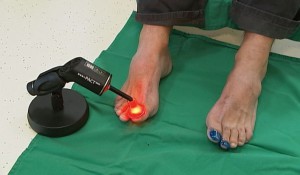 In cases of severe infection: use 2 x daily (can also be used 2 x in succession) for several days. Before applying the gel, remove as much of the affected nail tissue as possible and roughen with a file.

Do you have any questions?